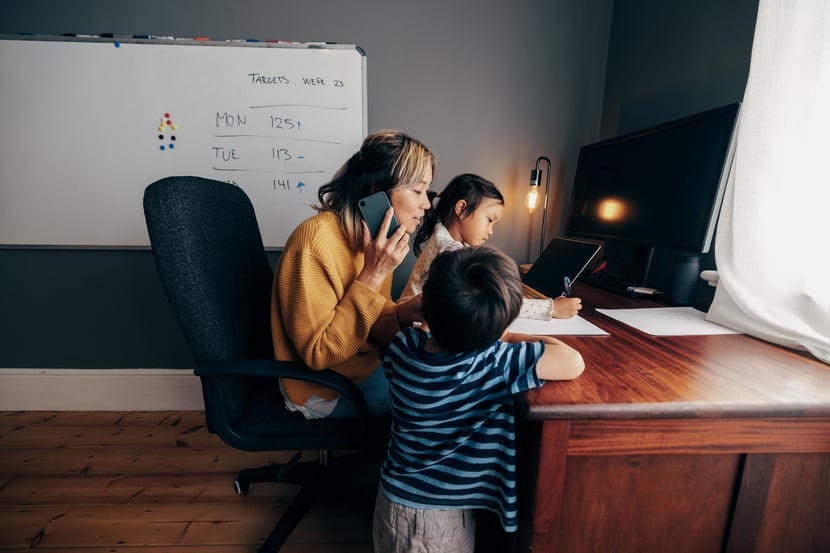 I believe COVID-19 has catapulted us into a New Age of Work. More particularly, I believe remote work, which my colleagues and I at Ninety.io prefer to call Work From Anywhere (WFA), will become far more ubiquitous than expected. I also believe this transformation is going to dramatically change not just where we work but how we work, and when we work. The types of shared insights, tools, and disciplines (ITDs) we need to build genuinely productive, humane and resilient companies.

In the long run, I think all of these changes will improve the well-being of humankind. I also believe that the transition will take years and come with a host of challenges.

In my opinion, transformative events, over the longer run, almost always are due to some material enhancement in one or more of the ITDs we collectively leverage to make life better. More specifically, in terms of how we evolve as a species, I believe there are moments in history where either a disaster (e.g., COVID-19) or, more often than not, a particular innovation causes a massive and relatively swift change. These transformative “events” are almost always attributed to either a material new insight (i.e., how we look at and/or understand things) or a new tool (i.e., how we do things). Either way, they always include a new discipline.

I suspect there are a host of reasons why TBTs tend to move so much more quickly than IBTs, not the least of which is because the cost/benefit of their impact is objectively measurable and, as a consequence, people, resources, and money move swiftly to take advantage of them.

IBTs, on the other hand, seem to take hold much more slowly for a host of reasons, not the least of which:

1. Cultural (e.g., poly vs. mono-chronic)
2. Political (e.g., communism vs. capitalism)
3. Rights (unalienable vs. foundational vs. aspirational)
4. Religious (especially if Others are unwelcome or worse)
5. Their effectiveness cannot be easily and objectively measured (back to why TBTs are so much more likely to be embraced). Consequently, they tend to be viewed more as debatable ideas versus quantifiable/objective insights into who we are or why we behave the way we do.

Two of the most notable IBTs are, IMO, democracy and human rights. These two highly aligned insights (or if you prefer to believe they are untested or false, you can call them “ideas”) started to come into being way back in Athens in the Fifth Century BCE. They were subsequently all but extinguished for well over a thousand years until the signing of the Magna Carta in 1215 (note the lack of any notable IBTs between 1000 BCE and 1215). It then takes us hundreds of years before the ideas were further advanced by the English (1642-1651), American (1765-1783) and French (1789-1799) revolutions. The good news is things then started to speed up with the Women's Suffrage movements (1840-1920), the Declaration of Human Rights (1948), the Civil Rights movements of the 1960s and the Marriage Equality movements of the 2000s.

To make our collective ability to evolve even more complex, history is full of examples where cultural/political / belief-based considerations have severely restricted access to new tools and/or evolved insights that unquestionably made life better.

One notable example is China’s multi-century stagnation that started during the Ming era. By failing to take advantage of an onslaught of transformative ITDs, China not only stalled out in terms of taking advantage of both the tools and insights that the rest of the world was taking advantage of but pushed narratives that directly or indirectly made the case that their more productive neighbors were enemies of the state. Why else would the government not be taking advantage of these ITDs?

The consequence of the China example and there are others is that the world obviously doesn’t evolve as one for a host of reasons, not the least of which is the broad recognition of, and respect for, the Rights of Others (i.e., we cannot demand that people respect our Rights if we don’t respect theirs). Consequently, here we are, thousands of years after the core ideas of democracy and rights were introduced, and humankind still has yet to take full advantage of ideas that have been statistically proven to make life better for all.

The Impact of COVID-19 and Work From Anywhere (WFA)

In terms of the shifts underway right now, I believe one is a massive shift in how we collectively work. More particularly, I believe WFA will become far more ubiquitous than expected.

I believe WFA was inevitable, and COVID-19 catapulted us into a New Age of Work. I also believe that this transformational shift is both tool and cultural-based.

The culture shift of WFA washed over us as our working society was forced to adapt and evolve through the pandemic. Within months, it became clear that working norms were being exposed by COVID-19, and then millions of us began to look at work through a lens that had been embraced by a relatively small group of "nomads" who had, up until this point, worked from the edge of society. At the risk of stating the obvious, broad-based WFA would have been almost impossible ten or twenty years ago because we just didn’t have the tools needed to make WFA work. In fact, during the onset of the pandemic, it seemed as if we were collectively pushing the capabilities of our information and communication technologies (I suspect someone wrote a witty article titled something like “We broke the internet!”). That said, we humans are a resourceful lot and, practically overnight, we found the tools we needed to make it almost easy for working people to Work From Anywhere.

As we all know almost too well, every now and then, we get lucky in a way that is almost uncomfortable. There is truth to the adage that luck comes to the prepared, but you always know deep down there was a huge amount of luck, not the least of which is timing.

Nearly fifteen years ago, I saw the need for someone to not only build a system that codified the fundamentals of business building but for a software platform that would make mastering it almost easy.

Speaking of helping and serving, one of the ways we are going to do this is by launching a whole new section on our website dedicated to WFA. There is a lot out there on WFA but we are going to exclusively focus on the needs of small and mid-sized businesses. We’re excited to launch this new “channel.” If this sounds interesting to you, subscribe to get the latest updates on topics, including insights on the WFA movement and more.

Mark Abbott is the founder of Ninety.io and a sought-after business leader, writer and executive-team coach. With nearly four decades of experience with early-stage, small and mid-sized companies as a lender, investor and business builder, his passion centers on helping people build extraordinarily productive, humane and resilient companies.

Learn about Ninety and request a free trial

A place for members and prospective members of the Ninety community to connect, share, teach, learn, help and do business together.