Technology has enabled us to Work From Anywhere. Without email, messaging apps, communications tools, and collaboration platforms, it would be almost impossible for most employees to get their tasks done from somewhere other than the office. But many of these tools are double-edged swords. Sure, they let us communicate easily with one another anywhere, anytime… but sometimes, that’s a problem.

Let’s take an example. You sit down to work on a creative task that you know will take two or three hours to complete — a sales presentation, a proposal, a messaging document or something similar — and ten minutes in, you can feel yourself really getting into it. Ideas are flowing, distractions fade away and … PING! There’s an instant message from a colleague asking for a quick update on a separate project.

You go into email, find the information she needs, and open up your document again, but it takes you a few minutes to collect your thoughts and get back into the groove. You’re finally making headway again when … PING! A Slack message from your boss appears asking for your availability to reschedule a meeting. After consulting your calendar, you send times when you’re free, and try to get back into the flow, but PING! … PING! … PING!

Researchers call this “hyper-refocusing.” You probably know it better as “multitasking.” It’s a skill that lots of people in the business world like to say they have. “Sure, I can monitor email, write a proposal and keep a conversation going on in Slack all at the same time!”

The Myth of Multitasking

Research has consistently shown that human beings do not multitask well, especially when switching between the complex kinds of tasks people do in modern business: writing; coding; designing, etc. In fact, a study from the University of London found that these constant notifications split our attention so badly that they lower our I.Q. by 10 points, a larger effect than smoking marijuana. More importantly, many of us are monochronically wired and/or live in monochronic cultures.

Switching between tasks may not necessarily have an enormous cost individually — maybe even less than a second per switch. But when people switch repeatedly between tasks time and time again, these switching costs compound. Even though multitasking may appear efficient, according to the American Psychological Association, “even brief mental blocks created by shifting between tasks can cost as much as 40 percent of someone's productive time.”

That’s an enormous cost for constantly switching tasks under the illusion of getting more done! And it points to a more effective way to work: chunking. In this approach to time management, you focus on a single task for a dedicated amount of time, ideally until it’s finished. By breaking up your time into dedicated chunks, you’ll find that you get much more accomplished throughout the day. This even works for smaller, less cognitively demanding tasks, such as responding to emails or scheduling meetings. Simply batch these all together into a chunk of time dedicated to these kinds of miscellaneous tasks.

But how can we overcome the constant digital interruptions that slice our time into ineffective little slivers and get any substantial creative work done?

Get the most out of your team with Ninety.io

The way many people do it, of course, is to do creative work in the early morning or after hours when they know their team members won’t be constantly slacking, texting or emailing them. But that’s not a humane solution. Healthy organizations respect team members’ family and personal time. Constantly working after hours or over weekends will eventually lead to burnout, and that’s not good for anyone.

We can make a big difference, here, by coaching our team members to discern between requests that truly need an immediate response and those that can wait a few hours, or even days, for an answer. Not everything has to be in real-time all the time.

Individuals should also have the freedom to let their team know when they are setting aside time to go on “do not disturb” chunks so they can focus on a complex, creative task. Of course, sometimes emergencies will come up that require interrupting someone who’s in the middle of a focused chunk of time, but these should be rare. To help ensure that they are rare:

Given how digitally oriented most of us are today, a phone call may be a good choice — it’s just a little less effort to send a text or Slack message than it is to call someone on the phone, and that bit of extra time can give others pause before interrupting.


Working from anywhere doesn't have to be a constant flow of interruptions. With the right leadership and agreements between team members to respect each other’s time when they need to focus, everyone can achieve the uninterrupted flow they need to produce incredible, creative work, and become extraordinarily productive to Get Smart Stuff Done™ (GSSD™).

Be Extraordinarily Productive, Humane and Resilient

We know you have many choices of products to help you build a great company. At Ninety.io, our passion is to help you and your organization become extraordinarily productive, humane and resilient.

Sign up for a free trial with access to all Ninety.io functions, features and support. We guarantee you’ll love it. 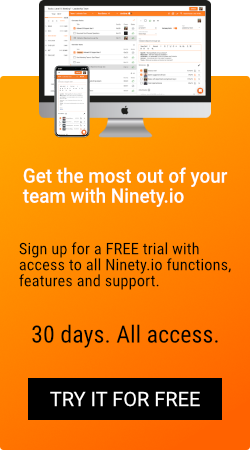